Sam Huxford looked at his text message from Nick Pedraza.

Hearing Nick faced acute lymphocytic leukemia brought back a lot of memories for Sam because he was diagnosed with cancer at 17.

“I remember texting with Nick and reflecting on all he had been through the last eight months—a broken laptop, broken wrist, someone rear-ended his car, and now this leukemia diagnosis,” Sam shared. “Nick was so young in his faith and journey with God. This was a lot for anyone, especially a new believer. I was worried Satan would use this to disrupt that journey. I prayed for God to draw him close, strengthen Nick’s faith, to sustain him, to heal him, and provide for his every need.”

How Do You Keep Faith in Difficult Times?

Sam was diagnosed with Hodgkin’s lymphoma, also a blood cancer, his senior year in high school after discovering a lump on the side of his neck that began to grow.

“By God’s grace we caught it early, it was stage one and localized in the lymph nodes in my neck,” Sam shared. “I’m optimistic by nature and basically said, Alright, where do we go from here? What’s next? I’m sure the Holy Spirit guided and comforted me through that.”

After four months of treatment, Sam’s cancer was gone. Through his cancer journey, God prepared Sam for his next steps as an everyday disciplemaker while deepening their relationship.

“God really used cancer to draw me close to Himself. God abundantly provided for me in this season, I would have to be blind to not see Him at work,” Sam shared. “I would say before cancer that I was a Christian, but I struggled. I knew I had a 95 percent survival rate and would probably live, but it still caused me to reflect on my relationship with Jesus. After I was healed from cancer, I came to college and thought, I’m done with just wanting a genuine wholehearted relationship with the Lord and not having it. This is when I really started following in Jesus’ footsteps.”

Sam recommitted his life to the Lord and his next steps connected him with The Navigators Collegiate ministry at Florida State University.

Nick’s diagnosis was different from Sam’s. He had approximately a 50 percent chance of survival, although his doctor increased it to 65 percent because of the amazing way he handled treatment—which included a stem cell transplant.

“I remember hearing his survival percentage and crying once we were off the phone,” Sam shared. “This is so hard for him to go through, but Nick continued to trust the Lord and looked to Him.”

Studying the Bible—Where to Start, Especially When You’re Hurting

Nick remembered hearing about Sam’s cancer story, but at the time he didn’t want to pry. Until he found himself in a similar position. Sam became someone who offered Nick spiritual encouragement and his personal experience of battling cancer. Sam was one of two friends Nick texted when he first found out about his cancer diagnosis.

“It was really comforting to have Sam in my life, because he had discernment and wisdom,” Nick shared. “As I look back on this, it is crazy to see how God orchestrated my friendship with Sam.”

It was through an initial text invite from Sam that Nick attended a Navigators Collegiate event and kept coming back. Nick recalled spending time with Sam, on a weekly basis, studying the Gospel of Matthew, at their local Chick-fil-A.

“Through weekly meetings of reading through Matthew with Sam, I learned so much about Jesus and His character. I learned what it means to really be a follower of Christ and know Him,” Nick shared. “I grew up in the church, but I didn’t really understand the gospel until college.”

Nick brought many questions to those Bible study times with Sam. He was hungry for knowing more about God and deepening his relationship with Him.

In a short amount of time, this hunger for God’s Word helped Nick through his toughest battles yet—a stem cell transplant and the recovery afterward.

“In November 2020 I got my stem cell transplant from an international, unrelated donor. Many patients struggle to find a match, but they found eight perfect matches for me,” Nick shared. “I got really sick after the transplant with pneumonia and sepsis. They had to put me on a ventilator. At one point the medical team wanted to move me to ICU, but they wouldn’t allow anyone to be with me there because of COVID-19. My nurse came in and saw how warmly decorated my room was for Christmas. She told my mom she couldn’t move me to the ICU and take me out of this environment. My mom believes this was God’s intervention and helped me recover.”

While time in the hospital was challenging, Nick says the time at home recovering for six months, waiting for his immune system to build also challenged him mentally, emotionally, and spiritually. Nick constantly turned back to God’s Word, spending time in the book of Job—a story of suffering—and even reading Galatians with a friend.

However, he was grateful for more energy to study the Bible with Sam via FaceTime. They read through Genesis, but also went back to the Gospels.

“As we read Genesis, I noticed the passage where God tells Abraham to offer up his son Isaac as a sacrifice. Abraham tells Isaac that the Lord will provide. Earlier that day I found out someone I had prayed for, who was in the ICU because of cancer treatment, had passed. I was sad and asked God why He didn’t provide for them like he did for me,” Nick shared. “This survivor’s guilt felt like a difficult dark hole to get out of. However, reading through the Gospels and even Paul’s letters reaffirmed my identity in Christ. I began to see His love and how He did provide—Christ—who is bigger than any of our struggles or sufferings. He is all we need.”

As Sam remembers those weekly Bible study meetings with Nick, there was a point he could tell something was different with Nick.

“Nick talked differently about God and even about his motives. I wanted to figure out what had changed, so I decided to share The Bridge to Life Illustration with him,” Sam shared. “I told Nick, ‘I notice you seem different than the other times we have met. Where would he put himself in this illustration?’ Nick put himself on the side with God. I asked him to tell me more about that. Nick’s priorities and desires had shifted and he wanted to know God more. From there we kept reading the Bible and exploring his questions together.”

“I still have the picture you drew of The Bridge to Life in my notebook,” Nick shared with Sam.

“The guy who discipled me at FSU meant the world to me. It really has come full circle as we pioneered Navigators Collegiate at FIU. I had been praying, Lord, would you lead me to a guy who is hungry to know You,” Sam shared. “Nick was the first guy who I crossed paths with who really wanted to know Jesus. We were regularly in the scriptures and Life-to-Life® discipleship. I would say he was an answer to prayer.”

Today, Nick is about 15 months post stem cell transplant and healthy. He continues school close to home and looks for ways to use his cancer story and suffering to minister to others. Sam is 12 years cancer-free and also connects with those who have gone through or currently battling cancer. He has even shared his testimony at cancer-research fundraising events. He is also involved with Navigators LaVida Network.

While Nick and Sam don’t live in the same town, they often connect online and occasionally visit.

“Even with the strenuous circumstances of the stem cell transplant, I saw how the Lord loved me through it. I didn’t stop having faith,” Nick shared. “Yes, I was angry at times and didn’t always understand what or why this was happening, but I always believed in His purpose and it would happen for a reason.”

Pray for Navigators Collegiate in Florida, especially those at Florida International University and Florida State University.

Sam noticed something had changed in Nick. He wondered where Nick was in relation to Jesus, so he drew The Bridge to Life Illustration in a notebook during one of their weekly gatherings. You, too, can use this illustration to share the gospel with your family and friends. Click below to download The Bridge to Life and discover the step-by-step process of sharing your relationship with Jesus and the abundant life found in Him alone with those in your circle of influence. 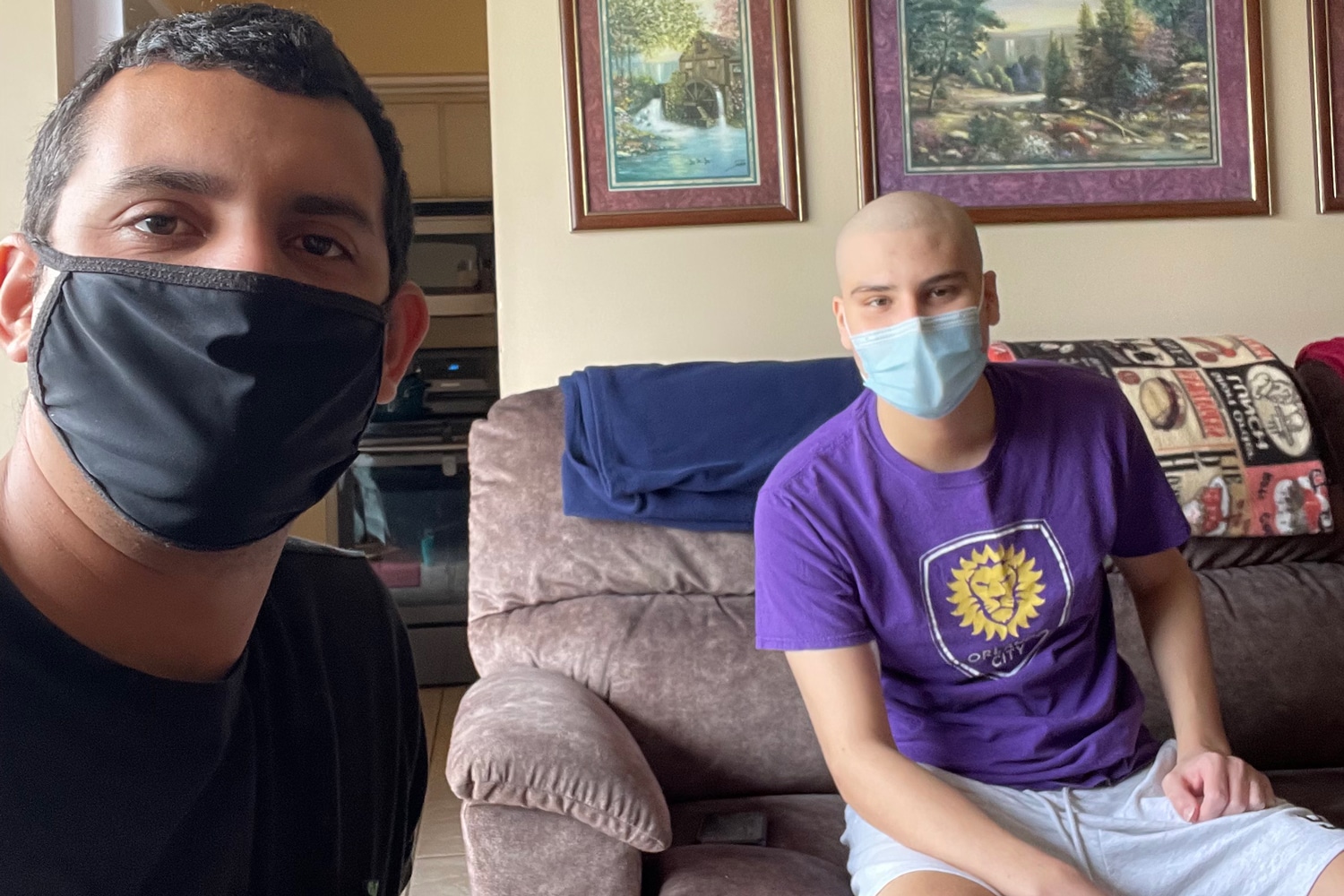