The city of Atlanta is active and multi-faceted. There’s a lot more to it than meets the eye. The same can be said for The Navigators ministry in Atlanta as Matt Letourneau, who heads up Navigator efforts in Atlanta, explains.

He describes how Matt Maxwell (who met The Navigators at Penn State University) left his job—managing 150 people with a multi-million dollar budget working to rebuild the factory of America’s largest and best-known chocolate manufacturer—to join The Navigators staff and work with urban youth in Atlanta.

“Maxwell is building on the four decades of work in the community done by another Navigator, Rich Berry,” says Letourneau. “He’s focused on kids between the ages of four and 14 living in the city. And the relationships that Rich established over the years have opened up all kinds of possibilities.”

“Maxwell has been doing this nights and weekends on his own for 17 years,” explains Letourneau. “But now he’s doing it full time while living the heart of the city.”

There’s also a significant student population in Atlanta. That’s what led Dave Bowman, a veteran of Navigator student ministry, to leave Penn State to direct all campus initiatives here. “Dave has trained more than 100 Navigator staff members, who now serve all over the world,” says Letourneau. “Now he’s responsible for the staff on four campuses in Atlanta. But these four campuses plan to reach out to 12 additional campuses in the Atlanta metro area—passing on what they’ve learned.”

Atlanta also boasts a thriving business environment, which brought Gary Christopher, who works with The Navigators Church Discipleship Ministry, from the suburbs into the city. “Gary is partnering with our Nav20s work to reach young business people in the city,” says Letourneau. “He teaches them how to walk with Jesus in the workplace, and how to train others to do the same.” Currently, there are more than 50 of these young adults dispersed throughout the city, having an impact on those around them.

Navigators aren’t the only ones engaged in ministry in Atlanta; God has opened up opportunities to work with other groups in the area. One organization serves homeless men in the city. “They do rehabilitation with about 1,000 men every day,” says Letourneau. “They came to us and said that even though they’d been doing this for a long time, they weren’t seeing the kind of long-term transformation in the lives of these men that they’d hoped for.” So they asked The Navigators to help them develop programs that would allow Letourneau to follow up the individuals going through their programs.

There are many sides to Atlanta. And that means many opportunities for ministry—something that excites Letourneau. The variety of initiatives provide individuals who are trained by The Navigators to be involved in advancing God’s Kingdom wherever God leads them. 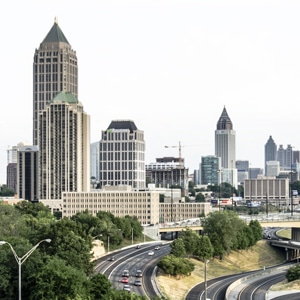