Skip to content
Go HomeBlogMinistry Impact StoriesResponding to the Responders

First responders are known for meeting desperate need. Police, firefighters, and EMTs regularly put their lives on the line to serve, protect, and save others. But who responds to the spiritual needs of first responders? 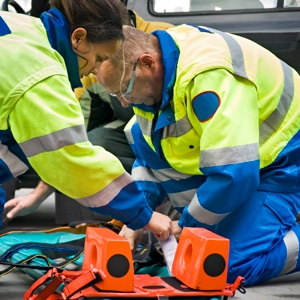 That question plagued Chris Green, a reserve police veteran and former police chaplain in the Portland, Oregon, area. Chris and others like him wanted to help the helpers. They formed a strategic relationship with a radio ministry and did several radio broadcasts hoping to meet first responders and raise funds. They were overwhelmed with requests from first responders who wanted spiritual help, but they raised little money.

In preparation for these broadcasts, Chris had read a book by Navigator Jim Petersen called, The Insider. “The book is about how as citizens of God’s Kingdom we’re uniquely positioned to live among the people we relate to every day,” Chris says. “It’s about how God has called us to be ‘insiders’ to our family, our neighbors, and our coworkers.”

Eventually, Chris met Jim Petersen, and shared how he wanted to minister to first responders. Jim introduced Chris to the Navs Military ministry. “It was so obvious that the military guys understood the first responder culture,” Chris says. “They could be insiders with the guys I was trying to reach.”

“We decided to work in partnership with The Navigators officially under Navs Military, as NavResponder,” Chris says. So how does it work?

“I got to know a police sergeant as I was doing a ride-along with him,” Chris says. “He was talking about doing a Bible study with guys in his unit. He suggested that I lead the study, but—in typical Navigator fashion—I told him he should lead it, and I’d help him.”

Later, Chris met Tony, a SWAT team member. “After Tony came to faith,” Chris says, “he started reaching out to the other members in his SWAT unit—about 20 men. About half of that team has since come to faith!”

Chris is excited about the impact these faithful insiders can have on others.

“A lot of agencies are losing their chaplains,” Chris says. “When a chaplain leaves, these servant leaders are stepping in and filling that void. First responders are meeting the spiritual needs of their fellow first responders! The simple act of intentional investment in the life of someone else is powerful. Nothing can replace that impact.”