Eighty-nine-year-old Navy veteran John Brown can be described as a loving husband, a devoted father and grandfather, a generous tradesman, an outspoken follower of Jesus. But there is one thing he is not. He is not bitter.

John has every right to be bitter about his early life. His father struggled with alcoholism and it made life hard for his family. John started working at age 7 instead of going to school. He didn’t learn how to read and write until much later in life. John never knew the contentment of a full stomach until he joined the Navy at age 17. Joining the Navy set John on a new path of gaining his independence.

“Three meals a day, that was just what I needed to gain strength and feel good inside,” John says. “I’d had experience as a welder since I was 16, so once I joined the Navy, they assigned me to work in the boiler room. I fell right into place. For the first time in my life, I was able to take care of myself and not be taken advantage of by others.”

John attended a Christian rally shortly after he entered the Navy and for the first time he heard that God loved him, and he gave his life to Christ. Soon after, he was baptized in a little stream in Kalihi Valley, Hawaii, by Navigator Harold DeGroff. Harold, led the Navs Military ministry in Hawaii, and taught John how to grow in his relationship with God. John learned how to read by memorizing the Bible. The Word of God became a cornerstone in his learning how to read and write.

This was a pivotal point in John’s life where he saw hope in God’s plan for him. Doors began to open for John in his career and in his personal life. He married his neighbor, Rozella, in 1950 and they have been together ever since. Rozella has a soft and gentle way about her—which is exactly what John was missing in life. John was determined to take care of her well. They had nine children and the love in their family is a strong bond.

John learned a valuable lesson from his difficult upbringing: work hard and never give up. Reading the Bible—learning to read in general—opened up many new doors for John to learn new skills. He attended Northwest University in Seattle for two years. He became a hand-writing expert and consulted in law cases. But, during most of his life, John worked as a welder. The International Brotherhood of Boilermakers recognized his 70 years of hard work and dedication.

“I can see God’s favor in providing for me and my family,” John says. “I have all I need and more. I see how God can change all things for His glory. Even in the darkest moments, God is sovereign and He reigns over us all. To Him be the glory. I have run the race with perseverance—and I am still going strong!”

The above photo shows Jim Downing, right, a longtime staff member with The Navigators, the ministry that helped nurture the faith of John Brown (left). The two retired Navy men met at a Pearl Harbor reunion and have been friends ever since. 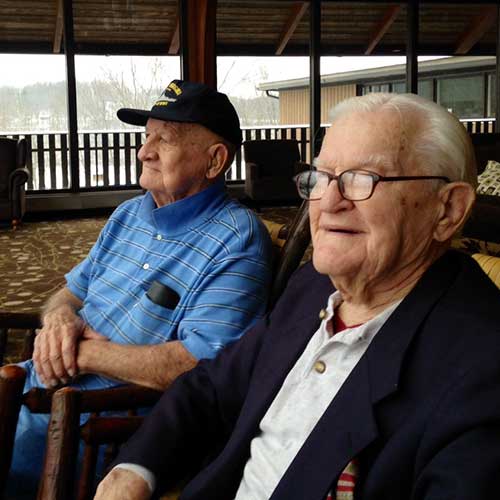