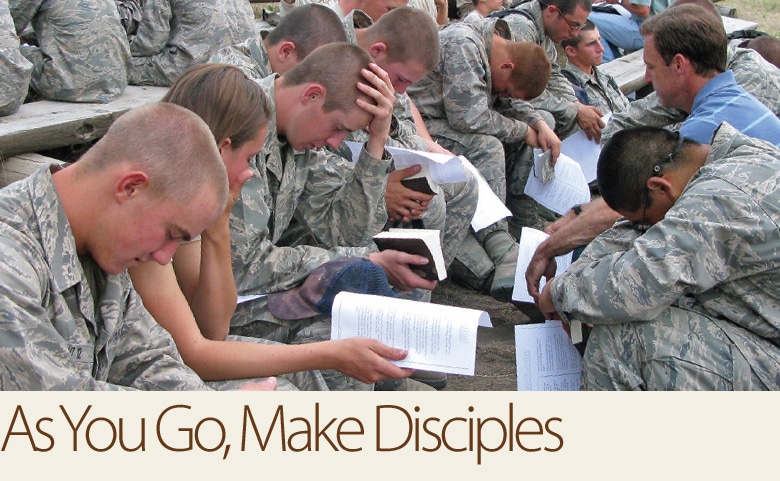 Perhaps no segment of American society is “on the go” as much as the individuals in our military. That’s why you’ll find 400 Navigator staff ministering on 110 military bases around the world.

Still, opportunities for ministry are staggering, with more than 30 U.S. Air Force bases in the United States having no Navigator presence. And there are more than 20 U.S. Air Force bases led by active military that need encouragement and training from Navigator staff. Similar situations exist for our Army, Navy, and Marine Corps personnel. The harvest is plentiful, but the need for laborers is great.

Ron and Marleen Koehler minister at the U.S. Naval Academy, and know what midshipmen face when they’re sent out. A “firstie” (an Academy senior)—who had come to Christ primarily through the influence of The Navigators—shared her concerns, telling Ron, “I fear heading out into the Fleet. I don’t want to plateau. I’ve grown so much [but] I’m fearful of the harsh realities out in the Fleet.”

Ron reminded her that Navigators are committed to coming alongside individuals to help them grow and become life-long laborers. “I told her there was a team of Navigators waiting,” said Ron. “She’s highly motivated to meet them!”

This young officer knows there will be someone there who won’t just offer words of encouragement, but will invest in her life. “Navigators in the Military Ministry, exist to initiate, influence, and ignite Kingdom movement through intentional spiritual transformation,” says Ken Norwood, deputy director for the U.S. Military Mission. “It’s the mindset the Apostle Paul had with believers in Thessalonica: ‘because our gospel came to you not simply with words but also with power, with the Holy Spirit and deep conviction. You know how we lived among you for your sake. You became imitators of us and of the Lord, for you welcomed the message in the midst of severe suffering with the joy given by the Holy Spirit. And so you became a model to all the believers in Macedonia and Achaia.'” (1 Thessalonians 1:5–7).

“We invest our lives in the lives and spiritual formation of these young followers of Christ,” says Ken. “We equip them to be models to those around them—believers and nonbelievers alike. We’re encouraged that their impact will ripple into future generations, wherever they are trained and deployed.”

That’s why The Navigators seeks to have a presence on every major U.S. installation in the world within the next 10 years. The Navigators wants to help ensure that as these individuals “go,” they continue to make disciples.

The views expressed here do not necessarily represent the views of the Department of Defense or its components.