Skip to content
Go HomeBlogDisciplemakingCommitment to God and Country

Mark Davis is dedicated to serving his country and fellow servicemen and women to the best of his ability. He’s also ready and willing to share the Gospel wherever God—and the Army—may send him.

Mark has travelled the world with the United States Army. He and his wife, Amy, have moved more times than they can count. “There have been times when I’ve wished I could stay in one location longer, to see how God was going to bring fruit from the seeds we have planted,” Mark says. But after years of ministry, he and Amy have learned that just as the world needs people who are ready to harvest fruit, it also needs people who are equipped to scatter the seeds of faith far and wide.

Mark’s journey began at West Point, where he met The Navigators. The friends he made shared his love of Scripture, evangelism, and discipleship, and his time at West Point rooted him in the faith and prepared him for the adventures God had in store.

After West Point, Mark served at Fort Bragg in North Carolina, where he saw his faith start to grow. A group of Navigator men at Fort Bragg began to mentor him, encouraging him to visit the single soldiers who shared small homes on base. There, young soldiers, crammed wall-to-wall, met for weekly Bible study and fellowship. Mark witnessed the power of the Holy Spirit at work.

“When I saw the enthusiasm these guys had for Christ and sharing the Gospel, I knew this was something real. This was something exciting and life-changing,” Mark recalls. “I had never seen anything like it.”

Mark began asking God to show him how he could spark that same enthusiasm in someone else. God brought two young men into his life, and Mark began to disciple them. He was amazed at the transformation he began to see in a short period of time. As he shared his life and love for Jesus with these two young men, they began to share their faith with others. Mark was witnessing the power of spiritual generations in action.

The friendships Mark made in his three years at Fort Bragg made a lasting impact on his life—an impact that followed him to his next assignment at Fort Benning, Georgia.

At Fort Benning the saplings of Mark’s faith began to grow into “oaks of righteousness” (Isaiah 61:3 niv). Believing soldiers at Fort Benning were ready and willing to serve, and the community of believers grew at an astonishing rate. It was a special time in Mark’s faith, ministry, and personal life. It’s also where Mark met and married Amy, his partner in all things, including ministry.

But Mark wasn’t spared hard times. He experienced a spiritual drought during his third combat deployment, this time to Iraq. Still, Mark knew God was at work in his life, strengthening his character and testing his commitment to sharing the Gospel. He never wavered in his belief that God was preparing him for greater things yet to come.

When the Army moved Mark and Amy to California they began to lead a vibrant ministry among military linguists. Their Army assignments meant relocating several times. That meant they were able to scatter seeds but were frequently called away before those seeds took root. Now they are watching as the seeds planted in California are beginning to bear fruit on other continents in other languages.

Mark and Amy are still with the Army—back where it all started—investing in young men and women at West Point. Their story speaks to the truth that when you allow God to direct your steps, He will often guide you on incredible adventures. 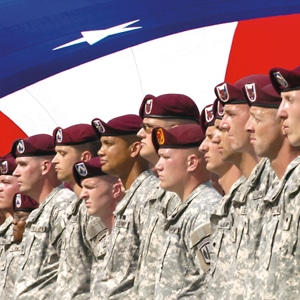