Jim Downing was promoted to glory on February 13, 2018 at the age of 104. His life and ministry touched countless people. Below are tributes written by current and former leaders within The Navigators. 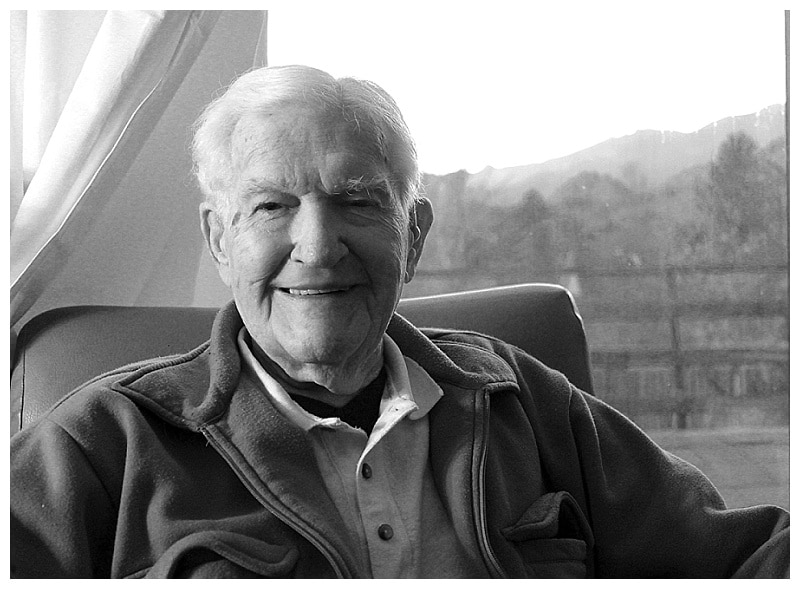 Jim was an influence among us for walking with God and having our life’s work flow from our knowledge of the Word and walk with Christ. Jim was always thinking about new ways to do things—particularly his passion for helping the next generation grow spiritually. He was not one to be “stuck” in old ways of doing things. He looked to the future with faith.

Jim has influenced me by being a man who is finishing well—with a spirit of humility and faith, not demanding influence but having influence because all see the character of Jesus in his life. I love the story of Jim engaging a local newsperson in a conversation on spiritual things—while he was being interviewed for a Pearl Harbor story. He calmly and patiently—in a winsome way—led the discussion and ended up meeting with the reporter later on to talk more deeply about walking with God.

I will never forget, a few years ago, seeing Jim walking through the airport—pulling his carry-on bag, toting his large walking stick (more like a shepherd’s staff) working his way patiently down the concourse. He was off to yet another influencing opportunity with a staff group. He has continued to live out his passion for God and investing in the next generation. He is well loved by all.

All around the world there are countless Navigators who treasure the opportunity they have had to sit at Jim’s feet. The reason why he is such a hero for so many of us is neither his longevity nor his military exploits. Rather, it is what is described Hebrews 11:13: “All these people were still living by faith when they died.” Jim inspired us to really live, not just occupy space or dwell on old memories. He never quit giving his life away, and God’s life flowed freely through him to others.

Jim Downing was my personal mentor. Though we never met “one-on-one” we spent lots of time talking about our responsibilities in the corporate and financial affairs of The Navigators. Through those times I came to realize that Jim was one of the wisest persons I ever knew. His wisdom, thought, was not simply human wisdom, but was based solidly on the Word of God. I remember one time he and I were discussing a difficult financial situation that a staff member had unwillingly gotten us into. He asked me if I could think of a Scripture that would speak to that issue. When I mentioned one, he said, “that’s our answer,” and he made a decision that was costly to The Navigators, but honoring to God.

Jim was also my champion. It was through his influence that I was given more and more responsibility in the corporate and financial affairs of The Navigators. He even had a small but critical part in bringing my first wife, Eleanor, and me together.

Jim continually amazed me. I met him when he turned 100! Imagine! He had the vim and vigor of my 50-something peers—perhaps more. But what struck me more than his zest for life was his daily desire to serve his Lord and Savior in the moment. With nary a thought for tomorrow, he lived, serving God each day, maximizing each breath he took. It was a most certain honor to publish his book “The Other Side of Infamy” and introduce this great Christian citizen to a whole new generation. His character and his deep devotion to his Lord are most certainly a model for us all.

Long life does not necessarily equate to a great or good impact, but in Jim Downing’s case his wonderful longevity has meant continuing fruitfulness and the magnifying of the blessing which his life has brought to many people all around the world. Jim was part of the birth of the Navigator movement on the USS West Virginia back in the early 1930s. By the end of his life, he was also among the eldest survivors of the Pearl Harbor attack on the U.S. fleet in December 1941. In the sovereign purposes of God the combination of these facts created a special interest in Jim’s life and experiences, which ensured that he had a ready audience everywhere, right up to the end of his life. Not only did Jim have an audience, but he also had the life and character to match his message. Jim’s courage, determination, and constant focus on explaining and proclaiming the Word of God made him a very fruitful sower of seed. In every state in the Union and every continent around the world, there are men and women walking with God today because of Jim Downing’s life and witness. May God continue to multiply them and may He give us all the grace to follow Jim’s great example.

I knew Jim Downing for more than 40 years. He was always an example of commitment, consistency, and optimism. His drive to keep growing and ministering was contagious. As my military and Navigator life expanded, his commitment to both spheres liberated me. He was always thinking, observing, and helping to keep our Navigator mission on target and focused. Our many discussions on both his observations and cautions made me a better leader. Lorne Sanny depended on Jim probably more than on any other person as he was thrust unexpectedly into leading The Navigators after Dawson Trotman’s death. Jim was far more than one of the original “7”. He was the one of the 7 who remained inside the Navs for a lifetime. He could always be counted upon to “step into the breech” in whatever need emerged. His stepping into the leadership of Europe, Middle East, and Africa at a time when most retired was an example.

Jim’s reflection and wisdom affected so many of us. His counsel, which was sometimes contrary, was always direct and kind. He told it like it was. Jim came into a time of wide influence in these last two decades, putting on his uniform, representing the multitude of WW2 veterans, using his position as a Pearl Harbor survivor. He always had such a positive witness for Jesus while he was doing good in many unnoticed ways— and in the limelight—made possible by his age, mental clarity, and personal stature. He was relentless to do all that he could in the time that he had left. His life and influence have left an indelible mark on The Navigators. “Remember your leaders, who spoke the word of God to you. Consider the outcome of their way of life and imitate their faith.” And Jim would not want to leave out the next verse: “Jesus Christ is the same yesterday and today and forever” (Hebrews 13:7,8 NIV). As a fellow military officer, I salute Jim. But more than that, I salute Jesus Christ for giving Jim and Morena to The Navigators.

I have been deeply challenged by Jim’s example of being a life-long learner. Even in his 90s every time I met him he had something new to share that he was learning. His interests and curiosity seemed to be insatiable and his memory amazing. And it always seemed that when I left a conversation with Jim I was more motivated to examine my Bible and take a fresh look at some passage that he had shared with me. I am deeply grateful for his life, ministry, and personal example.

Leave Your Own Tribute

We invite you to share your own story of how Jim impacted you in the comment section below.