A Lifetime of Growing as a Disciple

Talking with Jim Downing is like having a conversation with a living history book. He can chronicle the last 100 years of his life, and many of the important events around the world, with relative ease. 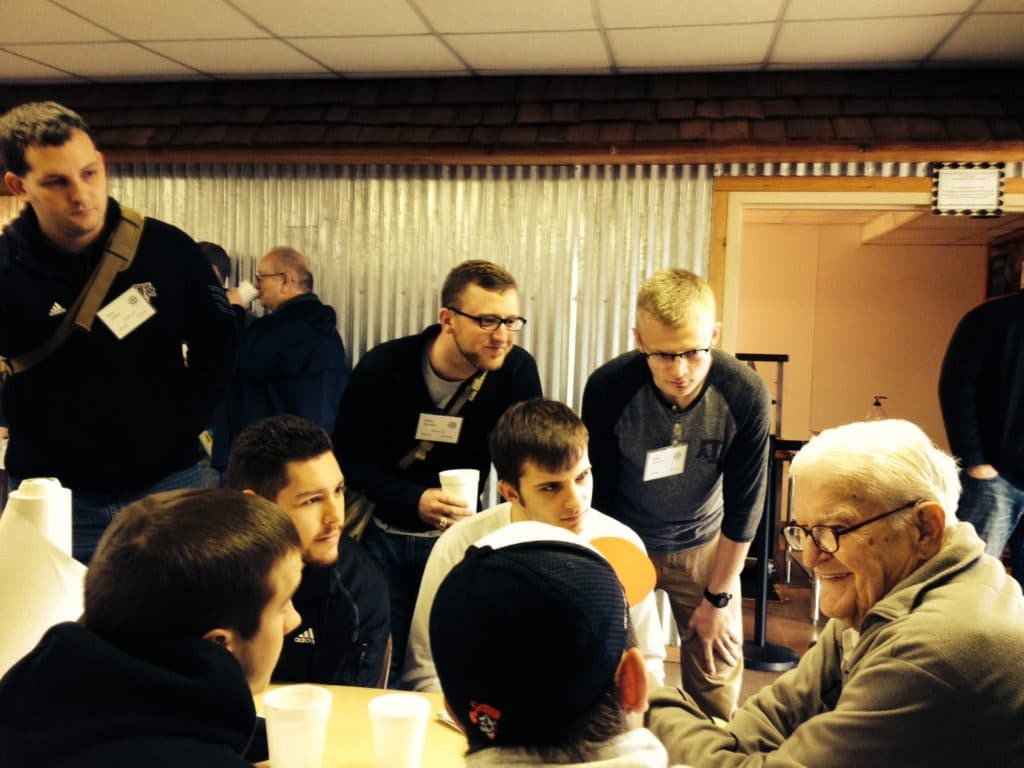 Jim and Morena, who had only been married for five months, were hosting breakfast for some Navigator servicemen six miles inland the morning of the attack. As Jim raced to defend his shipmates from the attack, Morena exhorted him, “The eternal God is thy refuge, and underneath are the everlasting arms” (Deuteronomy 33:27 KJV).

“We had just come in from the sea that Friday before,” recalled Downing. “When the attack actually occurred, my emotions ran the whole gamut. The first thing, of course, was surprise, fear, anger. Everything was very disorganized, but guys just naturally and instinctively did the right thing.” Although his ship sank with the loss of 106 crew members, Downing rescued many of his shipmates that day and helped put out fires aboard the USS West Virginia.

Six years earlier, in 1935, Jim Downing had made Jesus Christ the Lord of his life at age 22 under the influence of shipmates aboard the West Virginia. The men were being discipled by Dawson Trotman, and Downing and Trotman soon became friends. Eventually, Trotman’s ministry would become known as The Navigators.

Trotman taught sailor Les Spencer the foundations of Christian growth, and spent many hours with him praying, studying the Bible, and memorizing Scripture. When one of Spencer’s shipmates asked him the secret of his changed life, Spencer brought the man to Trotman and asked him to teach his friend. Trotman responded by saying: “You teach him!” And the 2 Timothy 2:2 vision was strengthened.

Downing became Navigator No. 6—the sixth Navy man discipled by Trotman. Eventually, 125 men on the USS West Virginia were growing in Christ and actively sharing their faith.

During their years in the Navy, Jim and Morena led Bible studies and discipleship groups among local servicemen and women in each Navy-assigned location. By the end of World War II, thousands of men on ships and bases around the world were learning the principles of spiritual multiplication by the person-to-person teaching of God’s Word.

A MAN OF MANY TALENTS

When Trotman died from a drowning accident on June 18, 1956, Jim Downing immediately sprang into action to help lead the ministry. He met with Lorne Sanny (Trotman’s successor) in New York, and the two came up with a plan.

“Lorne said, ‘I’m aware of the pressure that Dawson has been putting on you, but I’m going to double it,’” Downing recalled with a smile. “The first thing he wanted me to do was run Glen Eyrie. Take it off his hands.” Glen Eyrie Conference Center is the Colorado Springs home of The Navigators.

Downing ran Glen Eyrie for 13 years. He then turned his attention to help train staff around the world. At that time, the worldwide staff total was less than 200. Today, there are more than 4,800 Navigators in 106 countries.

“Jim Downing has always been a man for all seasons,” said long-time Navigator Bob Vidano, who first met Downing in the late 1950s. “There’s hardly a piece of Navigator history he hasn’t touched. Even when he dies he will still be alive. That’s true grit.”

During the next 22 years, Downing served The Navigators in many capacities, including deputy president and chairman of the board of directors. In 1978 he moved his family to London, where he served as director of the Navigator ministry in Europe, the Middle East, and Africa.

Jim Downing officially retired from The Navigators in 1983, but it was more of a ceremonial event. Downing continued serving Christ in a multitude of ways for The Navigators and anyone else who was willing to listen.

Morena, his wife of 68 years, passed away in February 2010. Now, at 101 years of age (he turns 102 on August 22), Downing has no plans to slow down or stop serving the Lord anytime soon. He speaks at several events each month.

College students hang on his every word whenever he speaks at a collegiate conference or visits a campus. They are attracted to the spiritual depth and wisdom of someone who has spent years studying, prayerfully thinking about the Word of God, and applying it to his own life and the lives of those around him.

Downing has a message for the older generations, as well. “So many adults in the 50-and-over crowd are wasting their lives,” Jim Downing said. “They don’t know what to do. I think I can prove that the only real inner satisfaction you have is when you’re using your gift; you’re doing what God wants you to do.