Jim Downing, beloved patriarch of The Navigators, went home to be with the Lord on February 13, 2018. He’d undergone surgery in recent weeks, and was unable to rally. He was known as Navigator #6, one of the first servicemen discipled by The Navigators founder Dawson Trotman. 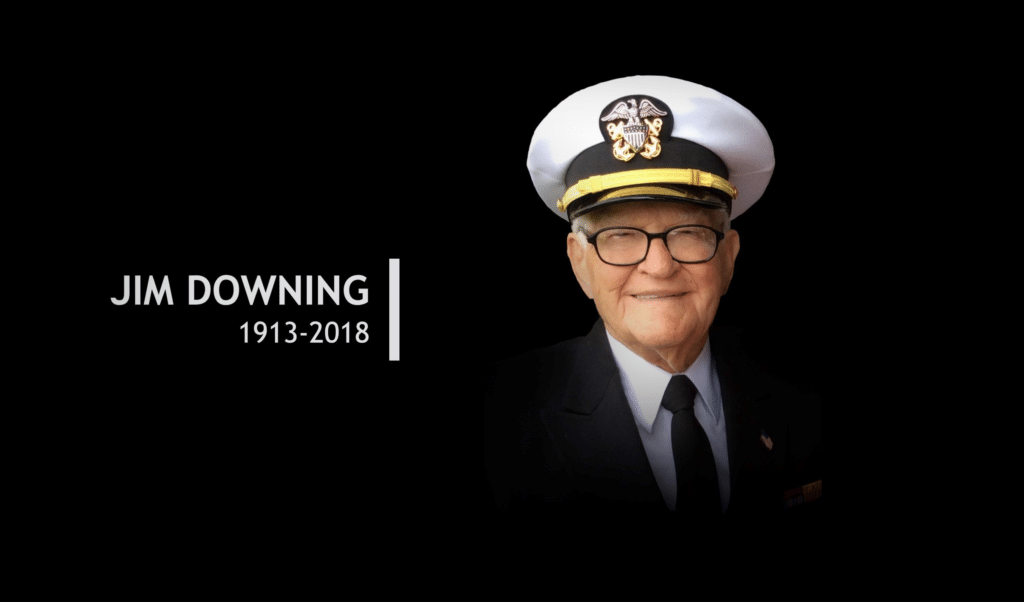 The Navigators U.S. Director Doug Nuenke says, “Jim was an influence among us for walking with God and having our life’s work flow from our knowledge of the Word and walk with Christ. Jim has influenced me by being a man who finished well—with a spirit of humility and faith, not demanding influence but having influence because all see the character of Jesus in his life.”

Jim was born August 22, 1913, in Oak Grove, Missouri, a small community on the eastern outskirts of Kansas City. While his family moved around frequently during Jim’s early years, he spent most of his childhood in Plevna, Missouri, where his father owned the local hardware store. “At the time I left home in 1932, I had never lived in a house with indoor plumbing or electricity,” Jim said.

He joined the Navy at age 19, primarily because it seemed the best way for him to earn a living. “Down deep in my sneaking heart I had a suspicion God might have some design on my life, but, like Jonah, I felt that by going to sea I would get away from Him for another four years,” Jim said. He discovered God was waiting for him aboard the first ship he was assigned to, the USS West Virginia.

Jim’s shipmates introduced him to Dawson Trotman, who was just beginning to work among a small group of sailors in southern California, a ministry that would become known as The Navigators. “Through the combined influence of the five shipmates of mine whom Dawson had trained, I gave my life to Christ in April 1935,” Jim said, making him Navigator #6.

“My life’s ambition was changed when I became [Dawson’s] spiritual descendant. I had planned to attend law school and enter political office. After meeting Dawson, my life became all about availability to his Lord and mine.”

After seeing one of his Navigator friends quoting Scripture as he talked to a fellow sailor, Jim realized he, too, wanted to have key Bible verses committed to memory. He ordered a Scripture memory course from Moody Bible Institute in Chicago with 108 verses.

“I got a list of the verses and tried prioritizing them by category to help me decide which to memorize first,” Jim said. “Because they all seemed of equal importance, I memorized 10 verses a day until I learned them all.”

As his Navigator friends accepted other duty assignments, Jim became the leader of the ministry aboard the West Virginia, and he assisted Dawson with the ministry throughout the Pacific fleet, teaching groups of sailors as they came into port.

God had something else waiting for Jim in southern California. Jim met his wife, Morena, through the Navigator ministry. Morena was one of the women who led Dawson’s ministry to high school girls.

Jim accompanied the Trotmans to Morena’s college graduation in June 1940. Jim said, “She was the graduating class women’s speaker and really wowed the audience, me included.”

By year’s end they were engaged, and on July 11, 1941, they were married in Hawaii, where Jim was stationed. “The altar was covered with orchids for which we paid $10. The bill for the 55-guest banquet was $55.”

Just 149 days later, the Downings’ lives were interrupted by the Japanese attack on Pearl Harbor. “I lost everything I owned except the clothes on my back. The only money we had was the change in Morena’s purse. On Christmas Day, Morena left Hawaii on a passenger liner turned military transport. We would not see each other face-to-face for the next 18 months.”

Jim’s life would be forever linked to the “date which will live in infamy.” During his later years he spoke frequently to church and civic groups about his experiences fighting fires, memorizing the names of his fallen comrades, and carrying their bodies off the ship. He wrote personal letters to the parents of each sailor who died on the West Virginia.

By the time Jim reached age 100, he was believed to be the second-oldest living survivor of the Pearl Harbor attacks. Jim’s story is related in detail on a website devoted to the USS West Virginia, and in his final book, The Other Side of Infamy (NavPress).

Jim’s Navy career culminated with his becoming commanding officer of the USS Patapsco from 1952 until 1955. He was also the self-appointed ship’s chaplain.  Dawson once said, “On Sunday mornings, his crew listened with respect to the gospel message given by their firm, kindly commander.”

Wherever Jim served with the Navy, Dawson asked Jim to work as a Navigator representative. “When we moved to Honolulu in 1952, I asked [Dawson] for an update on what I was expected to do,” Jim remembered. “Dawson responded, ‘Do what you have always done. Lead people to Christ and build them up to where they can repeat the process.’ The ministry of The Navigators never got more complicated to [Dawson] than that.”

After 24 years in the Navy, Jim decided it was time to devote himself to The Navigators full-time. In June 1956, Jim drove with a friend through the night from his home in Virginia Beach, Virginia, to Schroon Lake, New York, where Dawson was speaking at a retreat. Jim and Daws were going to work out the details of Jim’s transition to Navigator staff. When Jim arrived, he learned Dawson had drowned the previous afternoon.

Jim was needed more than ever, and the new Navigator president, Lorne Sanny, asked Jim to handle affairs at The Navigators headquarters at Glen Eyrie in Colorado Springs.

“One of the biggest needs I saw for improvement was in our financial management. Lorne responded by making me financial vice president, which was the first administrative title I held,” Jim said.

Jim went on to serve in many capacities as part of Lorne Sanny’s team—Glen Eyrie supervisor, Military ministry director, treasurer, headquarters manager, assistant to the president, vice president, and deputy president. In 1978, Jim moved his family to London, where he served as director of the Navigator ministry in Europe, the Middle East, and Africa.

Jim grew to love and respect Lorne Sanny as much as he had Dawson. “When we were both at home, Lorne and I had a standing appointment at 1:30 every day for prayer, fellowship, establishing responsibilities and schedules, and making plans and decisions.”  They met this way for nearly two decades.

Jim officially retired in 1983, but in many ways his ministry was just beginning. His retirement allowed him to travel the world to speak and teach. His practical application of Scripture, his warmth and wit, made Jim a popular speaker, especially among college students.

In his 2007 book, Living Legacy, Jim wrote, “One of the lessons I have learned in 94 years is that when we are healthy mentally, physically, spiritually, and emotionally, there is no problem or challenge to which we cannot find a solution we can live with. When we are depressed and stressed about an unsolved problem, we should look beyond the issue to find the real problem. The problem is likely that we are unhealthy in one of these areas. When our health is restored mentally, physically, spiritually, and emotionally, we can solve any problem and finally get a good night’s rest.”

This is the kind of wisdom that endeared Jim to everyone he met.

Jim lost his beloved wife of 68 years in February 2010. Her life and ministry is recounted in the article “Morena Downing: Hero of the Navigator Movement.”

Jim’s 100th birthday (August 22, 2013) became a community event with stories in the The Denver Post  and on local televised news programs, and with celebrations with family and friends at Glen Eyrie and in The Navigators U.S. headquarters office. Colorado’s U.S. Representative Doug Lamborn read a declaration into the congressional record honoring Jim’s birthday, which began, “Mr. Speaker, I rise today in honor of Jim Downing who will be celebrating his 100th birthday on August 22, 2013. Throughout his century of life, he loyally served the United States Navy, was a devoted husband and father and faithful to his Creator.” Jim also received a letter of congratulations from President Barak Obama and first lady Michelle Obama.

Jim penned his biography in 2016, The Other Side of Infamy. This book allowed him to express his deepest beliefs and detail his significant military career, including his experiences at Pearl Harbor. The book also earned him a Guinness World Record as the oldest male author, having completed the book at age 102.

Jim wanted to speak and teach as long as his health allowed. One of his favorite messages in the last few years of his life was that the most important things in life are meaningful relationships with God, family, and friends. “I’m satisfied as long as I can have those three things,” he said.

The legions of people he influenced for Christ, the hundreds who called him “friend,” and the living legacy of his children, grandchildren, and great-grandchildren testify that Jim left this earth a very satisfied man. It is equally certain the Lord was satisfied with the life of this faithful servant.

“Well done, good and faithful servant! You have been faithful with a few things; I will put you in charge of many things. Come and share your master’s happiness!” (Matthew 25:21 NIV).

Resources by or about Jim Downing 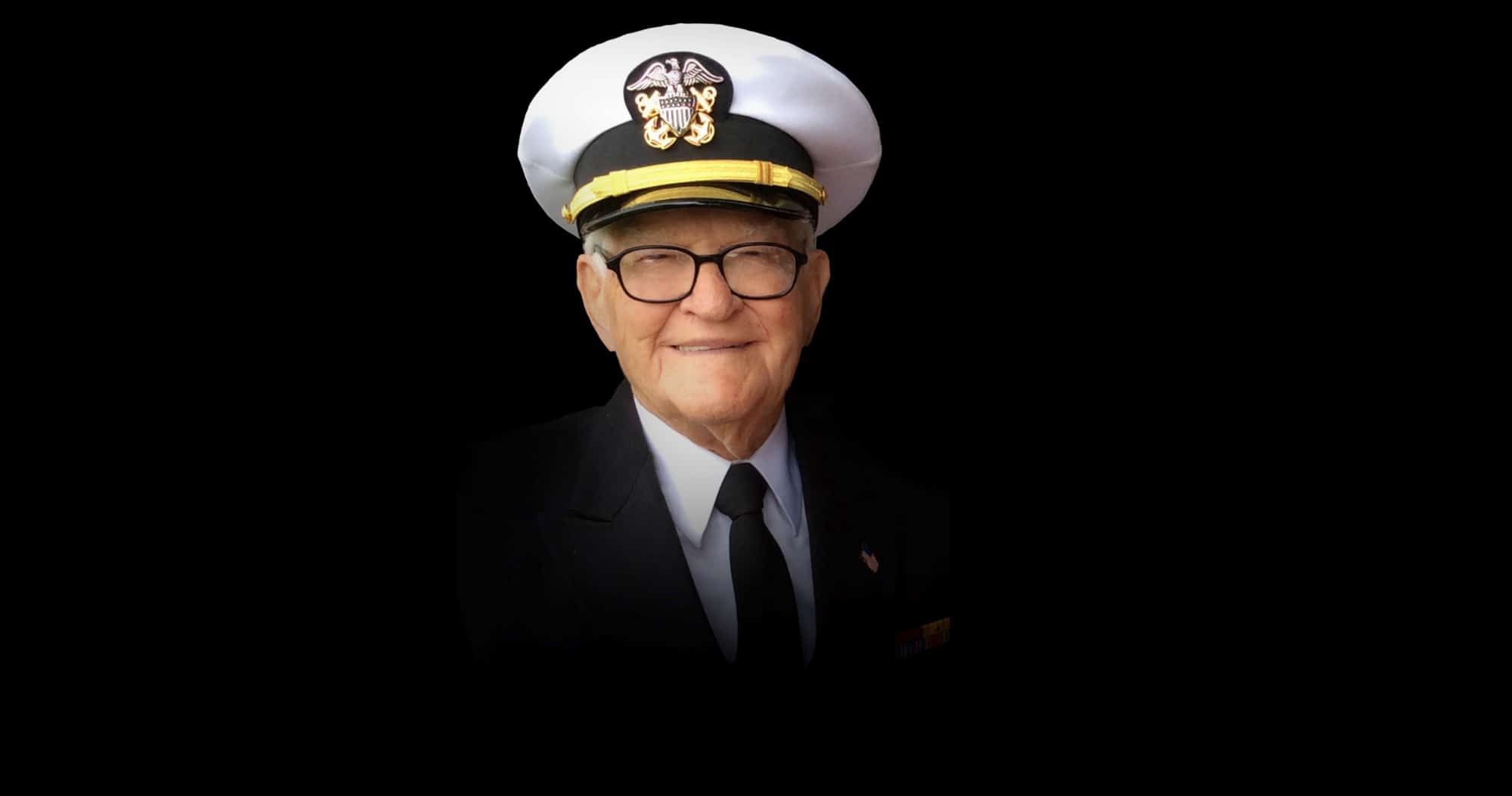 Find hope in how His Spirit reveals to you about trusting Him more through this resource, 31 Days Toward Trusting God, by Jerry Bridges. Continue Reading