Four years ago, Marleen and I mailed our first prayer letter from the Naval Academy in Annapolis, Maryland. It contained a photo of Walt Reynolds, a midshipman who was helping paint our home. We met Walt in his sophomore or “youngster” year at the Academy and invested the next two years mentoring him one-to-one. During that time, God led Walt to serve as both a worship and Bible study leader. He shared his faith and discipled fellow midshipmen. 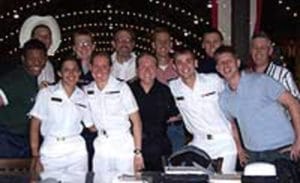 Today, Walt is training in Pensacola, Florida, to become a helicopter pilot. That is his vocation. But Walt’s passion is knowing, worshiping, and serving Jesus Christ. His desire is to become a lifetime laborer who, by the grace of God, is advancing the gospel among his friends and those with whom he lives and works.

Recently, Walt sought counsel from me as he considered moving in with roommates who do not know Jesus. He knew the temptations of living with them would be many. But as we prayed, we both sensed God giving him the green light.

The Lord then put it on Walt’s heart to begin a Bible reading group. He invited all his roommates and another house of young men to read through Matthew. As Walt took this step of faith he told me, “I really feel that God placed Isaiah 45:2,3 on my heart as I was moving in with these guys.” The verses say, “I will go before you and will level the mountains; I will break down gates of bronze and cut through bars of iron. I will give you the treasures of darkness, riches stored in secret places . . . ”

“I know God is going to break down the bars and gates that are keeping them from really getting to know Him,” Walt said. “He goes before me, which is cool.”

To say their first study of Matthew went well is an understatement. Here are some of the men’s responses:

“Kings, warriors, spies – are there any ninjas?”

“This one’s a real page-turner.”

For these men who are not very familiar with the Bible, The Message version was a hit. Walt was even caught off guard by how easy it was for the guys to grasp what was going on simply because it was written in layman’s terms. As the men read more of the Bible, they were intrigued by the stories of David, Abraham, and Rahab.

One of the men engaged Walt in a discussion over Luke 6:46. “Why do you call me ‘Lord, Lord,’ and do not do what I say?” As they talked, Walt could tell God’s Spirit was working in his friend’s heart. He told Walt, “I’ve got to walk the walk, not just talk the talk.”

This ensign had accepted the Lord as a boy and became good friends with Walt during their freshman year at the Academy. They studied the Bible together and met one-to-one during their senior year. Even so, this is the first time Walt has seen his friend’s heart really connect with God.

According to Walt, “Perhaps the biggest change in my heart since I’ve left the Academy is the realization that the foundation to a personal, active relationship with God is simply that – a foundation. I’m beginning to understand that God desires my faith to go beyond me to others.

These past four years, Marleen and I have had the privilege of helping lay the foundation in the lives of men and women from the Naval Academy. God has sent them all over the country and to Japan, Cuba, Afghanistan, and Iraq. We thank God for those who enable us to continue to give the gospel and ourselves to individuals like Walt.