The Wheel diagram, created by Navigator founder Dawson Trotman in the 1930s, is a simple and effective way to visually explain the structure of a God-glorifying life. Sharing it can be as simple as drawing it on a napkin or notepad. The diagram challenges us to think deeply about how to be an obedient follower of Christ and each part represents a crucial component of a vibrant Christian life. 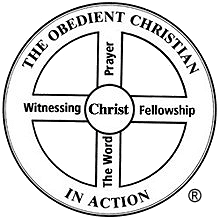 The Wheel diagram, created by Navigator founder Dawson Trotman in the 1930s, is a simple and effective way to visually explain the structure of a God-glorifying life. Sharing it can be as simple as drawing it on a napkin or notepad. The diagram challenges us to think deeply about how to be an obedient follower of Christ and each part represents a crucial component of a vibrant Christian life.

How You Relate to Yourself

THE CENTER HUB AND OUTER RIM

Total surrender to Christ’s authority and lordship is not always a decision made right at conversion, but is a necessary act of will. For the believer, the “old life” has gone and the new has come (2 Corinthians 5:17), and Christ has begun to dwell in us (Galatians 2:20). God creates within us the desire to do what He wants us to do in order to express His Lordship in our lives.

The Obedient Christian in Action:

Some acts of obedience to God are internal, such as attitudes, habits, motives, values and day-to-day thoughts. But even these eventually surface outwardly in our relationships with other people. Keeping His commands in obedience is our outward indication of inward health and love for Christ (John 14:21, Romans 12:1).

How You Relate to God

God uses His word to speak directly to us, revealing not only who He is, but how He calls us to live and interact with everyone around us (2 Timothy 3:16). This means an earnest personal intake of God’s Word is essential for our spiritual health and growth (Joshua 1:8). As God speaks to us through the Scriptures, we learn how to obey Him and apply the gospel to every part of our lives. We also come to know Jesus personally and find He is worthy of our steadfast allegiance.

Prayer is the natural response to God as we hear Him speak through His Word. It is sharing our heart with the One who longs for our companionship and who cares about our concerns. Prayer not only trains our hearts and minds to know the power and glory of God, but also turns His ear towards action in our lives (John 15:7, Philippians 4:6-7).

How You Relate to Others

God has directed Christians to build each other up through interdependence and loving relationships with each other (Hebrews 10:24-25). Gathering together as the Body of Christ draws God close around us as we praise Him and encourage one another (Matthew 18:20).

God has given believers the joy and responsibility of telling the world about the good news of Christ’s work on Earth (Matthew 4:19). In fact, sharing about His amazing grace is the natural overflow of a rich, vibrant life in Christ (Romans 1:16)

Download a print friendly PDF of The Wheel Illustration to pass along. Navigator Discipleship Tools are designed for sharing with your Bible study, church group, and those you are discipling.

History of The Wheel 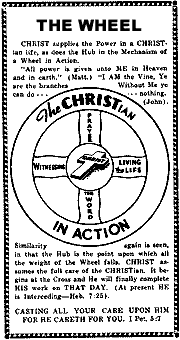 Two years after his conversion, twenty-two year old Dawson Trotman who later founded The Navigators sought to establish teen-aged boys in the Christian life. He had compared the Christian life to a three-legged stool. But life in Christ was too exciting and dynamic to live sitting down, so he asked God for another idea.

God gave him The Wheel illustration. The hub represents Christ with four equal spokes connecting into the source of life and power. Dawson believed this was a graphic model of the kind of disciples Christ wanted.

In the early 1930s, The Wheel became a major emphasis in Dawson’s ministry among sailors. And ever since, it has helped countless believers understand what they are called to do as disciples of Christ. May it also benefit you.

This is a sample of Dawson Trotman’s Wheel Illustration tract from the 1930s.

The Evolution of The Wheel Illustration

“They say the Christian life is like a three-legged stool,” the young Sunday School teacher told his class. “You must be supported by three things–the Word, prayer and witnessing—to be effective in your Christian lives.”

Throughout his ministry, Dawson Trotman, founder and first president of The Navigators, liked to use illustrations or diagrams like this to help others remember basic principles of the Christian life. So in the 1930s, when he was working with Sunday School classes and boys’ clubs, he used the best illustration he had heard describing the balanced Christian life—the three-legged stool (Illustration 1).

But Trotman became dissatisfied with the illustration. It left the Christian sitting down—certainly not a practical way to approach the dynamic Christian life he saw taught in the Bible. After much thought and prayer, he designed what he called “The Wheel” illustration to solve this problem.

This wasn’t The Wheel many of us know today, but a forerunner to it. The hub was Christ, the center of the Christian’s life; but there were only three spokes on this wheel, corresponding to the three legs of the stool (Illustration 2).

Now he had the Christian moving, but he began to see another weakness in the illustration. It showed that Christians should witness, know the Word and pray, but it left out the application of the Bible to all areas of one’s life demonstrating the power of Christian living.

So Trotman added a fourth spoke—”Living the Life”—to The Wheel (Illustration 3). The rim was called “The Christian Life” or “The Christian in Action.”

This emphasis on living every area of life with and for the Lord came at an important time. Dr. Arthur Glasser, dean of the School of Mission at Fuller Theological Seminary, says, “Dawson was one of the pioneers in reacting against easy believism. Daws said ‘You can’t treat a command in the Bible as advice. A command is a command!’ He was a living protest against a form of Christianity that sought to understand the Bible, but which wasn’t serious about obeying it.”

Later the new fourth spoke, “Living the Life,” was shortened to “Obedience” and the rim was renamed “The Christian Living the Life” (Illustration 4). Some people asked, “Where is the Holy Spirit in the Wheel?” Trotman answered that the Holy Spirit was intrinsic throughout, being necessary to the fulfillment of each component of The Wheel.

After Trotman’s death, in 1956, The Wheel continued to change. Some thought “Obedience” shouldn’t be a spoke, since it wasn’t in the same category as the other spokes. Rather, it was the theme of the entire Wheel.

At the same time others realized that another basic element of the Christian life was not included in The Wheel, even though it was being practiced throughout the body of Christ and was found throughout the New Testament—fellowship. So in 1968 “Obedience” was moved to the rim of the Wheel and “Fellowship” replaced it as a spoke.

That leaves us with The Wheel as it is today (Illustration 5). And whether it remains in this form, or is eventually changed again, it is a useful way of understanding and remembering the essentials for living the Christian life, just as its forerunners were.

Original title: “The Wheel Was Once a Three-Legged Stool,” by Ray King from the January 1975 issue of NavLog.