Navigator staff Craig Parker thought it would be fun to hand out Krispy Kreme donuts in the student union at Boston University (BU). This could prayerfully lead to some good conversations with students. And twelve hundred donuts seemed like a good number. So early one morning, Craig bought 100 dozen donuts and then met Navigator staff Becca and Andrea on campus. They set up a table with orange juice, coffee and stacks of donuts.

Then chaos broke out. 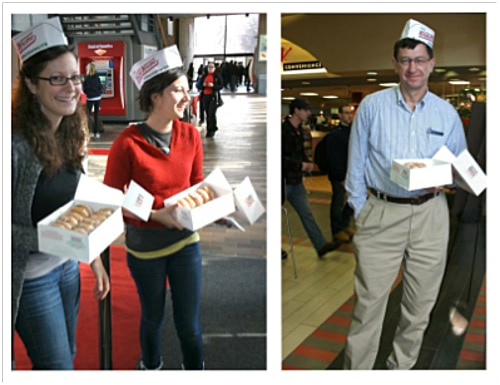 For the next three hours, they handed out doughnuts as fast as possible. A few times groups of students gathered around. Craig, Becca, and Andrea promoted their upcoming spring break trip and talked to anyone they could.

One student, “Carter,” asked a question. “Why are you guys doing this?” After Craig gladly responded, Carter added, “I went to church last Sunday. It was the first time I have gone to church in three years at BU. I miss being able to talk about spiritual stuff like I used to in high school.”

Craig emailed Carter later to ask if he would like to have lunch sometime and talk more. Carter replied yes. They continue to talk about many things, including spiritual stuff since Carter wants to explore faith.

On another day at BU, Craig was giving a different student a ride home. This student said, “I used to pretend I was a Christian […] I finally gave up and put my Bible away for a year. It is because of my friend Sam that I came to Navs. I want to thank you, and the Navs for listening to me and for not expecting me to be a Christian. Over the last two weeks, largely because of being with all of you, I have decided that I really want to be a Christian. I think it is the most meaningful way to live my life.”