Skip to content
Go HomeBlogSharing Your Faith“The Lord is My Shepherd . . .”

David* works with international students at a major Midwestern university. The students with whom he engages are often doctoral or post-doctoral candidates. In other words, these are pretty bright individuals—people who will be in positions of influence when they return to their home countries.

Despite their obvious intelligence, however, seemingly simple spiritual truth is anything but automatic to these students. When David and his international friend met to discuss the Bible (something they do regularly), the concept of Jesus Christ being our shepherd surfaced.

David’s friend seemed to understand the concept. “The shepherd,” he explained, in somewhat broken English, “feeds, protects and loves his sheep. The Bible talks about how much Jesus loves His sheep.” But with a bit of a wry smile, the visiting scholar added, “that doesn’t seem like a very good comparison: comparing Jesus to a shepherd, and people to sheep. A shepherd plans to eventually kill his sheep. Some of my friends were talking about that recently.”

What initially struck David was how his friend had missed that the Good Shepherd gives abundant life and lays down his own life for his sheep. But it was very significant that he was ruminating over the concept. And he was talking about it with his friends!

David’s friend may not be ready to make the jump from “Jesus is the Good Shepherd,” to “The Lord is my shepherd,” but the seeds have been planted.

*Not his real name
EDGE Corps 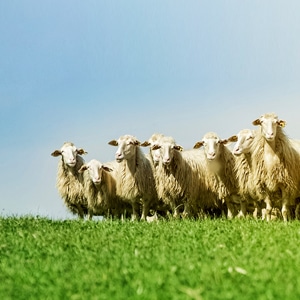