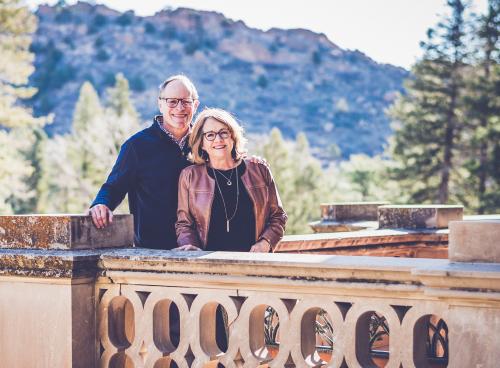 About Doug and Pam Nuenke

Doug and Pam currently serve in Colorado Springs where Doug is The Navigators U.S. President. They are deeply grateful for your prayers and financial support.

For those of you who may not know them very well, here is some information about them and the ministry the Lord has given them through The Navigators.

Doug and Pam have three adult children, two sons-in-law, and six adorable grandchildren. They enjoy spending time with others as they build relationships and see God transform lives. Doug loves to fly fish and mountain bike and they both enjoy reading, the outdoors, spending time with their family, and being with friends.

They came on staff in 1992 after serving on the staff of a local Denver church and in leadership with Doulos Ministries. During their years with the Navigators, they served at the University of Kansas and helped create and then directed EDGE Corps. Doug served on the leadership team of the Collegiate Ministry and later served as national director of Metro Mission. Doug was selected as the U.S. President of The Navigators in 2008. Pam leads, as well, mentoring women and traveling the country and world with Doug to meet with staff, donors, and friends of the organization.

As The Navigators U.S. President, Doug oversees the strategic work of the National Leadership Team and serves under the guidance of the U.S. Navigator Board of Directors. He leads with faith, trusting God in matters of oversight and caring for the hearts of Navigator staff and volunteers. Doug is committed to serve the purposes of God in The Navigators for His glory. He longs to lead as David is described in Psalm 78:72, “And David shepherded them with integrity of heart, with skillful hands he led them.”

Doug and Pam have a high value for partnering together in ministry and discipling individuals who will in turn disciple others (See 2 Timothy 2:1-2 and more thoughts on Doug’s blog, Your Disciplemaking Coach). They long to see the Gospel of Jesus advanced into the nations through everyday people who make disciples. They love how God opens doors for new friendships that provide opportunities to love people and reflect Jesus in the normal pathways of life—where they live, work and play.

Robert Coleman’s classic, The Master Plan of Evangelism, highlights the central strategy of Jesus’ disciplemaking: He invested in the lives of a few to reach the many. Coleman writes, “Jesus’…

Friends, it has been quite a year, hasn’t it? A global pandemic, surging awareness and activism in racial inequality, wildfires engulfing large swaths of forest, and a political…

This year has been turned upside down by the coronavirus which has multiplied around the world, disrupting our rhythms and plans. The coronavirus has devastated lives and economies, taught us…

Vital Elements of a Disciplemaker

Dawson Trotman, the founder of The Navigators, often posed the question: “Are we still engaged in making disciples the way Jesus laid out in the Great Commission? It’s a question…

There is no greater time for disciplemaking than now! Ministries around the U.S. and the world are reporting increased openness to Jesus. And the Navigators are on the front lines…

The turmoil and uncertainty of the past several weeks have made us all feel fragile. It’s quite normal to struggle with weary distress when assaulted by a pandemic! Both Jesus…

Light in the Darkness

A Message from Doug and Pam Nuenke
The past couple weeks we’ve had some spring snow storms here in Colorado, with accompanying clouds. Between my normal day job, stress from the…

The stories of Jesus on the Sea of Galilee have always touched my heart, but in recent weeks, I’ve been struck by the promise of buoyancy amid stormy waters. The…

How do we make it through days like this? How do we fully live into these unprecedented times as believers and hopeful carriers of the gospel?

In conversations with strangers and…

Our Hands in His

Imagine being with Jesus and His disciples in their final days together. Jesus had told them He would not only be leaving, but dying at the hands of their enemies….

The first Christmas came and went, hardly a blip on the radar. The infant Jesus was recognized by a few: some astrologers, a narcissistic king, and smelly shepherds. To say…

Pam and I love spending time with our grandkids. There is nothing better than getting on the floor to play with them or cuddling up to read a story. We…

The Barna Group recently released a fascinating report on how adults respond to evangelism. Among the findings, adults preferred faith interactions sparked out of sincere engagement rather than depersonalized outreach…

A Life of Duty or Dependence?

As Americans or people in the western world, we are all too prone to measure our spiritual life by what we know and what we do, rather than by Who…

I suppose we all have those times when life seems to be full of crisis, challenge, or conflict. During one difficult season, facing what some have called a “dark night…

Perhaps the most distinctive characteristic of The Navigators is our commitment to intentional, generational disciplemaking. Navigators founder Dawson Trotman’s interaction with Les Spencer, a Navy sailor he intentionally discipled, illustrates…

Change from the Inside Out

Stadiums could be filled with believers who struggle with sin patterns that are difficult to break. Have you ever looked in the mirror and said to yourself, “Why do I…

Bringing God into Every Situation

Prayer is to spiritual life in God as blood flow is to physical life. When we turn prayer into just a task, a meeting, or a ritual, we lose the…

Perhaps sometime today God’s Spirit brought someone to mind who would benefit from your encouragement to know and walk with Jesus. This can be intimidating. Where do you start in terms…

Recently I heard a leader ask his group to share the last time they led someone to Christ. You could feel the tension—some had never had the opportunity to do…

The Cross: Why All the Fuss About Easter?

As we approach Easter, there are many things that could be said about the importance of the death and resurrection of the Lord Jesus. However, there are three primary things…

Motivation and Power for Obedience

I grew up in a religious context where my motivations for doing good things were guilt and the fear of getting caught! As people rescued from darkness (Colossians 1:12-14), we…

The Beauty of Passionate Prayer

Do you ever go through seasons when your prayer life feels mundane and emotionless? You may be in a season like that right now. Or perhaps you’ve never had a…

Community in an Independent World

American life has always seemed to exalt the idea of individualism, the person who battles challenges alone. It’s yet another place where we need God’s help not to conform to…

Being a Missionary Where You Are

Do you believe that your life matters? That you’re destined to bring healing to a broken world that needs what you have to offer? Yes, you!

Jesus’ appeal to some of…

We can all lose track of the significance and multifaceted power of what God has done for us. I believe most followers of Jesus periodically struggle with experiencing the fullness…

Open-Hearted Prayer Before a Generous God

I was in the 7th grade. Need I say more? My relationship with Christ was limited to a little pinch of guilt that kept me showing up for Sunday services….

Living with Hope Between the Now and the Not Yet

Much of our life is spent in the in-between time, between our current reality and anticipated future. For some, it is living with the longing to be married. For others,…

Change the World Through Discipleship

During my sophomore year in college my life was changed by discipleship. I joined some fellow students to study what it looks like to change the world—“Jesus’ way,” they said….

The Transforming Power of the Gospel

A number of years ago, I rushed into the house just before dinner guests were to arrive. I hoped to find things in order, but instead our 2-year-old was “being…

The Sustaining Presence of the Holy Spirit

Lately, I’ve been praying for friends across the country who are experiencing deep hardships. I’m often caught up with emotion for the burdens they bear.

Jesus’ disciples must have felt similar…

Rhythms of Engagement and Withdrawal

My wife, Pam, and I enjoy going to concerts. The beauty of the music comes not only from the notes, but also from the spaces between the notes. The pulse…

Unlike Any Other Book

Throughout history, people have used the Bible to create religion. The very book that was meant to bring people to God ended up being used to create rules and regulations…

Compassion in the Tears of Jesus

As followers of Jesus, we are called to compassion (see 1 Corinthians 12:25-26). If we really desire to be clear reflections of Jesus Christ in our broken world, we will…

Changing Your Corner of the World by Making Disciples

The heartbeat of The Navigators and the focus of Jesus’ earthly ministry are quite similar. Both embody a passion for making disciples that is “generational” and “intentional.”

We are not destined…

Evangelism Out of the Overflow of Our Hearts

A lot of people experience religion as a list of “to do’s.” Most of us have felt at times that we should do more: pray more, read the Bible more,…

As Jesus walked the dusty paths of first century Palestine, his purpose was clear. His words and life were a portrayal of good news—the Gospel. Mark, the Gospel writer, put…

Evangelism as Endorsed By Jesus

No matter what other ways we might consider participating in evangelism and the advancement of the Gospel, the one Jesus endorsed by His own prayer is the idea of God…

When people ask me what makes someone a Navigator, I tell them I envision an everyday person living next door to people everywhere in such a way that the Gospel…

A Vital Movement of the Gospel

The Navigators is pleading for God to use us in a movement that has God as its source and sustainer and reaches people in every walk of life.

Reflecting the Character of Jesus

Reflecting the character of Jesus in a broken world is what being a disciple is all about.

When we’re overcome and harried by life, God often brings us to a point…

Is Spiritual Apprenticeship A Dead Art?

For centuries, craftsmen passed down knowledge and skills through a method of mentoring and training known as apprenticeship. It was once the primary means to pass skills from one generation…